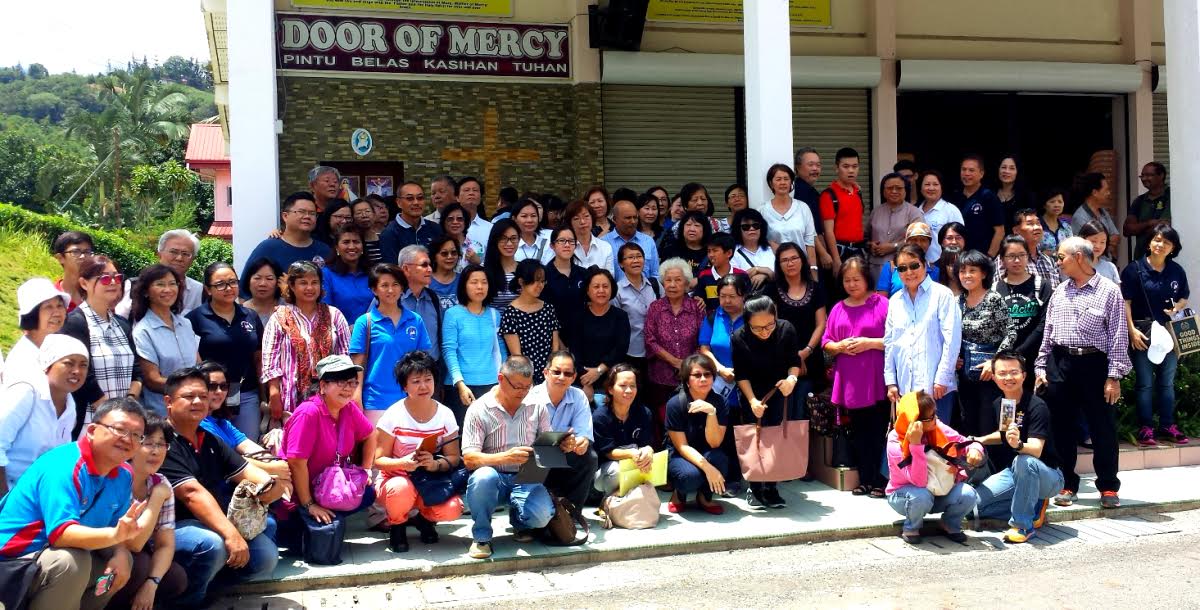 RANAU – A total of 121 pilgrims from St Simon Church Likas gained new insights and aspirations on their Catholic faith after taking part in the Jubilee Year of Mercy (JYM) pilgrimage to St Peter Claver Church here on 27 Aug 2016.

Besides entering the Door of Mercy, the pilgrims, led by pastor Fr Cosmas Lee, also climbed a steep hill for the Stations of the Cross and feasted on local fruits, among others.

It was the second Door of Mercy visit organized by the JYM committee.  The first was to St Peter Church Kudat on July 31.

For pilgrim Tracy Lim, the pilgrimage here was a grace-filled experience.

“There are many things that keep us from entering the Door of Mercy. This jubilee is a time to put all of that behind,” she said. “The pilgrimage is not just to receive mercy, which we all need, but to also offer mercy.”

Another pilgrim, Theresa Ham, said entering the Door of Mercy gave her a sense of peace and reconciliation.

“Jesus was the first pilgrim. His entire pilgrimage was focused on being obedient to His Father. As pilgrims, we never journey alone. Jesus was first accompanied by His Mother.

During the two and a half hours’ journey to Ranau, the pilgrims recited the Rosary and were briefed on the trip by their respective leaders in the three buses.

The group reached Ranau before noon and were welcomed by representatives of the parish and its priest Fr Nicholas Stephen, who briefed them on the significance of the year.

The procession into the Door of Mercy was led by Fr Cosmas as he recited the Litany of Saints and responded by the pilgrims.

During Mass (St Monica’s Feast Day), Fr Cosmas reminded the pilgrims on the importance of prayer.

Before the Stations of the Cross, the pilgrims were invited for a fellowship at the parish canteen.

“It was not an easy walk as it involved climbing up the steep hills, among others, but it was nevertheless a wonder-filled journey,” said Tracy.

On the way back they visited St Philip the Apostle Catholic Church (Gereja Katolik St Philip) in Tamparuli.

At the end of the trip, each pilgrim received a certificate of completion of the pilgrimage. – SOCCOM SSL