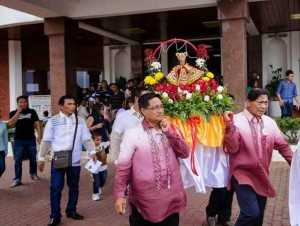 TAWAU – More than a thousand Filipino parishioners gathered to celebrate together with other communities the annual event of the Feast of Infant Jesus, marking its 17th year with the theme: Faith, Hope and Love,at Holy Trinity Church Jan 18 .  The feast is also known as Feast of Santo Nino De Cebu.  The image of the infant Jesus symbolizes hope and protection.

The bi-lingual Thanksgiving Mass in Bisaya and English was presided over by Fr Johnny Raju.

Elmer Kaili, an elder of the community proclaimed the Gospel and delivered the homily in Bisaya, translated from the homily of Fr Johnny, which reminded the faithful of our call as God’s servant and likened it to the call of Samuel. God called Samuel through others. Samuel did not know that it was God calling him. But he listened to what Eli said and eventually responded to the call.

It is the same with us. We are called in different ways to serve the church. We need to learn to listen to what the church is telling us through the elders of our communities. We are called to be in union with other members of the church.  It is God who extends his invitation to us to come close to him and to know him personally. He wants us to experience his love and forgiveness. In answering him, we serve him.

Members of the Filipino community from St Mary’s Cathedral Sandakan, St Dominic’s Church Lahad Datu, St Peter Kunak and St Jude Semporna, and as far as Keningau enriched the occasion by their presence.

At the conclusion of Mass, parishioners proceeded in procession with the statue of the Infant Jesus to the parish hall (pic), followed by a luncheon fellowship.

John Francis Herrera from the Philippines Embassy, in his speech, expressed his appreciation to the Filipino community for their commitment to journey as one family.  He noted that the presence of other communities is a clear sign of solidarity and unity, and called on the Filipino community to continue to work hand in hand with other communities to build up the local parish.

Rufino Pontilas, the Filipino Pastoral Committee Chairperson in his turn expressed his gratitude to all who were involved in organizing the event and commended them for their commitment.

Andrew Kiat as PPC Chairman congratulated everyone for making an effort to come together as one big family of Holy Trinity Parish.

The event was made lively with colourful presentations from the various groups of the Filipino community of the parish. A singing competition was also part of the program. The highlight of the event was the Sinalug dance. – Dospo, Julita

BUNDU TUHAN –A new Tadika mission was officially opened under…

SANDAKAN - The Diocese of Sandakan hosted the 8th Sabah-Heilbronn…

BUNDU TUHAN - The Pontifical Mission Societies (PMS) of the…

Recent Posts
Archives
Categories
"Come away to some lonely place all by yourselves and rest for a while" (Mk 6: 31). Looking for a place for group or personal Retreat?
Check our BTRC
© Copyright - Archdiocese of Kota Kinabalu, Sabah, Malaysia - All Rights Reserved 2020
Back To Top
×