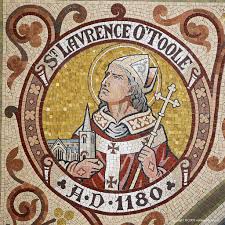 Laurence was born in 1128 near Castledermot County Kildare.  He entered the monastic life after spending a period as hostage in the hands of a rival chieftain family.  At the age of 25 he was chosen as abbot of Glendalough and in 1161 became the archbishop of Dublin.  He lived simply and returned to Glendalough every Lent.  However, much of his time was occupied with ecclesiastical reform and negotiations with the English.  He died while travelling through Normandy in 1180 and was buried at Eu. – CTS New Daily Roman Missal 2012, p 3145