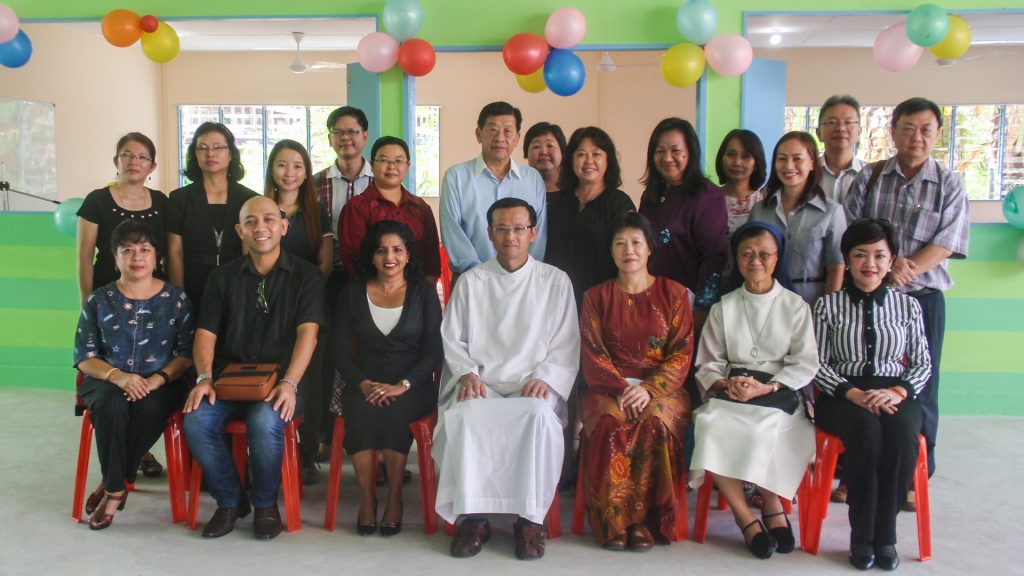 In her welcoming address, chairperson of the School Management Board Mary Gomez said the workshop good for fifty pupils was one of the priorities of the school.  The workshop was built during the recent May-June school break at the cost of RM83,000 with funds from the government allocation and other sources.  It will also double up as a classroom for the existing “floating” class.

In his turn, Abp Wong assured those present that the needs of the mission schools are part of his pastoral concerns.  This was why he took time out to officiate the function though he had just returned from a meeting in Singapore.  He then officiated the rite of blessing, blessing the workshop and surroundings with holy water, while those present accompanied his movements with prayers.

After the blessing, all adjourned for the fellowship.

The primary school traces its roots to 1922 when Fr Valentine Weber and Mr Tay Bee Chuan built this first school for girls on a piece of land on Jalan Tunku Abdul Rahman (then known as South Road) with Sr Rose Charnley and Sr Gerarda Bonengaar of the Franciscan Missionaries of St Joseph (“White Sisters”) to manage it.  It had two streams: English and Chinese.

In 1969, the White Sisters handed over the primary school to the local Franciscan Sisters of the Immaculate Conception (FSIC) with Sr M Cecilia Liew as the new headmistress.  She helmed the school for 14 years.

The kindergarten moved from Jalan Kebajikan to Sacred Heart Cathedral compound together with Shan Tao Kindergarten in 1984.  Shan Tao was previously known as Kung Ming School started by Thomas Lee Yen Chiang in 1938 for the Chinese Catholic pupils.  The pupils in the Chinese section  of St Francis Convent School moved to Kung Ming School after the war.

As termites invaded the primary school, efforts were made to find an alternative location.  The primary school, together with the School Management Board, succeeded in acquiring a 20-acre piece of land in Bukit Padang, Kota Kinabalu in 1988. Plans were immediately implemented for the construction of the primary school with future plans to re-site the secondary school there.

With funds raised jointly by the school, the PTA, the School Board of Management, and with the financial assistance from the government, the primary school  moved from Jalan Tunku Abdul Rahman to the new premises at Bukit Padang in 1993.

The primary school has a current population of 698 pupils (over 400 are Christians) and 64 staff with morning and afternoon sessions.

KOTA KINABALU - In his Pastoral Letter released on 7…

VATICAN CITY - In a letter responding to questions raised…

Recent Posts
Archives
Categories
"Come away to some lonely place all by yourselves and rest for a while" (Mk 6: 31). Looking for a place for group or personal Retreat?
Check our BTRC
© Copyright - Archdiocese of Kota Kinabalu, Sabah, Malaysia - All Rights Reserved 2020
Back To Top
×