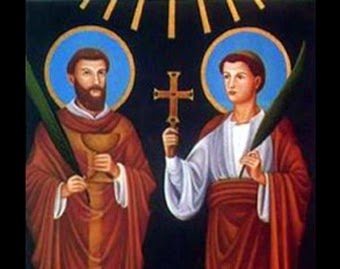 Marcellinus and Peter were members of the Church of Rome.  Marcellinus was a zealous priest while Peter was an exorcist (one of the minor orders).  Pope Damasus is our authority for their martyrdom during the Diocletian persecution in 304.  He received this information from the executioner himself.  They were beheaded in a grove, but their bodies were moved and buried in the cemetery Ad duas Lauros on the Via Labicana.  Once peace had been restored, the Church built a basilica over their tombs.  Their names are included in the Roman Canon. – CTS New Daily Roman Missal 2012, p 2729; Christian Prayer 1990, p 1141